Have you even wondered on what are the best album cover created in the entire music industry as for today? well actually, there are a bunch out there and there’s still keep on producing album hence there’s a new cover album to be included in the list. But as for today and as you’re an avid fan of the oldies songs you might got your list already in mind that you think is the greatest album cover ever created.

But if not, you can check my list below see it yourself on how awesome these albums are and their artists that am sure your parents will appreciate much..

While the music on an album is of upmost importance, the sleeve that holds the record gives artists a space for artistic expression. This has always been the case; from the first microgroove long-playing phonograph that was released in 1948, through the vinyl era and the many CDs that you see in music stores today.

However, which is the greatest album cover that has ever been created? Managed print specialist United Carlton has attempted to find out by drawing up a shortlist of six standout examples.

Take a look at each pick and then visit the firm’s Twitter page to give your thoughts on the best of the bunch, or offer your favourite that didn’t make the list:

(Cover can be seen here: http://www.thebeatles.com/album/sgt-peppers-lonely-hearts-club-band)

What better way to kick off our list than with the cover of a Grammy-winning album that was created by art champion and director Robert Fraser? The sleeve was a combination of work by designers Jann Haworth and Peter Blake and saw more than 70 artists, writers, thinkers and figures who inspired The Beatles featured. As a subtle nod to the end of the Hard Day’s Night-fueled Beatlemania era, the cover also saw the iconic British band as they were in 1967 standing alongside their younger selves.

(Cover can be seen here: http://www.thebeatles.com/album/abbey-road)

The Beatles are the only band to make our list twice, though it shouldn’t be much of a surprise when you consider that the two album covers featured are those for Sgt. Pepper’s Lonely Hearts Club Band and Abbey Road. For the latter, the famous foursome chose to part ways with simulations and instead feature themselves walking across a zebra crossing in a typical British street. It is a scene that has been replicated countless times ever since.

Pink Floyd – Dark Side Of The Moon

(Cover can be seen here: http://www.bbc.co.uk/music/reviews/gncz/)

Legendary designers Hipgnosis were the brains behind the cover for Pink Floyd’s album Dark Side Of The Moon, with a single beam of light shining through a prism and forming a rainbow on the other side creating a simple yet bold look. This image was used to convey the band’s stage lighting as well as the lyrics some of the album’s songs. It also speaks volume that despite the sleeve having no words, most people instantly knows its name and the band behind it.

(Cover can be seen here: http://www.independent.co.uk/arts-entertainment/music/features/nevermind-anniversary-nirvana-baby-kurt-cobain-dave-grohl-a7328811.html)

The cover for Nirvana’s album Nevermind was apparently conceptualised after Kurt Cobain watched a programme about water births. After hiring photographer Kirk Weddle to bring the sleeve into reality, the result was an innocent baby swimming underwater towards a dollar bill that was hanging from a fishhook. The rest was history.

Meat Loaf – Bat Out Of Hell

The songs featured on Meat Loaf’s Bat Out Of Hell were crazy in a good way, so it was fitting that the sleeve of the record was just as brilliantly wild. Conceptualised by Jim Steinman but actually created by comic book artist Richard Corben, the cover saw a motorcycle powering out of a graveyard while a giant bat loomed menacingly over the tombstones in the background.

(Cover can be seen here: http://www.queenonline.com/en/the-band/discography/queen-ii/)

Music fans are likely to recognise the sleeve of Queen’s album Queen II, as it also features in the music video for the band’s hit single Bohemian Rhapsody. The cover is a simple one, with the four members of Queen standing in a diamond formation upon a black background. Rock, who had enjoyed work with the likes of David Bowie, Lou Reed and Iggy Pop, has since being quoted as saying: “It made them look like much bigger a deal then they were at the time, but it was a true reflection of their music.”

Looking for the place where you could buy off your wedding gowns and even your cast dresses for your wedding day that may happens pretty sure? if so, why not checking off this online shop called D-daydress.com where hundreds of wedding dresses were listed and selling over for the cheapest prices. Yes! all the designs and pattern that are being in trend and those classic ones are being sell out there hence this was the most and awesome place to buy your desire dresses. The shop has  a wide array of designs you can confirms it by checking their site yourself for you to see on how lovely their dresses were.

I know most of you prefers to have this classy and usual type of wedding ceremony like in church but most of you too were fondly enough to make it done over the sea shores or garden which needed an separate kind of wedding dresses, of course. Because you couldn’t wear off the ball gown in the sea or in the garden because this was right to wear in the church alone and there’s an perfect dresses for this type of wedding that you can also see at the wedding shop I’ve mentioned. Hence, indeed! wedding dresses online from ddaydress are ones need to check out before getting your gowns in any mortar stores available in your area.

And for more list of wedding dresses for your consideration, you may now check this link here: http://www.d-daydress.com/cheap-bridesmaid-dresses-c10032.html where the dresses for wedding and  cheap bridesmaid dresses online that everyone’s needs are listed here for your own convenience. Go check it now and buy some dresses for yourself. 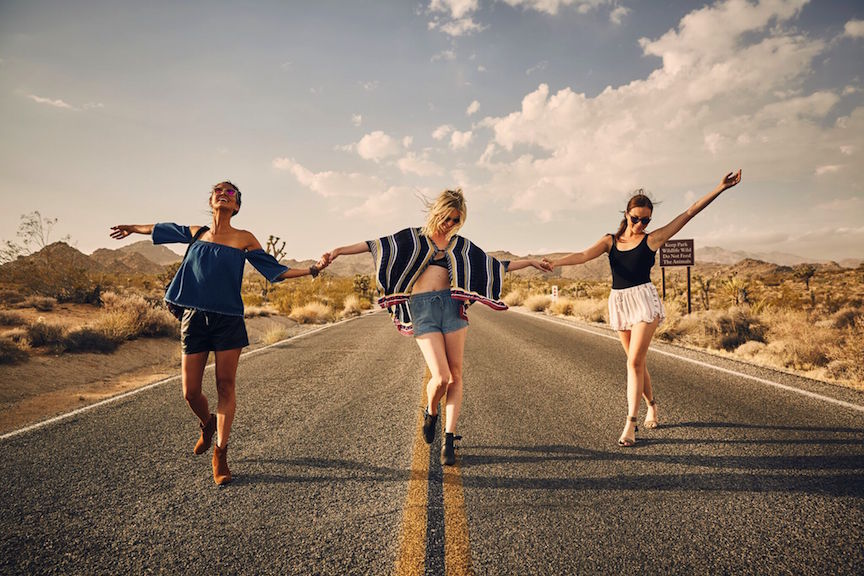 If you or a woman you want to buy a gift for embodies the spirit of one who knows what she wants in life and wants to look and feel beautiful when she goes out to get it, she is the type who enjoys wearing free-spirited and unusual clothing in order to stand out in the crowd. Often combined is the style of the American West with the East Coast pragmatism.

Here are some examples of new offerings that would catch the appreciative eye of onlookers:

This Polyester/Spandex blend jumpsuit will have you sparkling at any party because it features a silky top, sequin pants, and an open back. It is high-waisted and has adjustable straps and a side zipper inset. Dry cleaning is recommended.

A 100 percent Tencel romper that features a drawstring waist, a snap placket, side pockets, and a keyhole back. Hand washing is recommended.

This knit multi-colored animal-free poncho is an outstanding stunner with a detachable faux fur collar and a bottom fringe. Dry cleaning is recommended.

This is a varsity-style 100 percent Polyester fitted jacket in Vintage Black and Cream. It is fully lined and features faux fur fringe details, a standup collar, sweater sleeves, a mini front pocket, and side pockets. Dry cleaning is recommended.

This Polyester/Rayon blend bomber jacket is covered in black sequins and has a muted checkered print and front pockets. The perfect outerwear for any dress-up party.

The vision of Sedona East, which offers the above exquisite Sedona clothing, is to bring the free-spirited and decorative lifestyle of the American West to women through unique clothing and accessories. The Sedona East woman is confident in her own skin, creative, free at heart, an adventurer, intelligent, playful, and loves to adorn herself every day in fashionable clothing.

Girls, dont be upset as I tell you now that classic kind of wedding dresses aren’t on point for this generation. Yes! that’s true as a lot of newlywed and planning to get married soon are declining to have this kind of wedding dress, wait – am preferring with those oldie ball gowns that your mum used to wear on her own wedding dress. Because as you can see this generation are too bold and light that means people liking to wear something fashionable and at the same time handy to wear and emphasize their shape. Hence, it is best for you to take a look online shop first like in Amodabridal before considering having your dress done by the nearest mortar store your area. Go check the shop I’ve mentioned and you’ll gonna see on how lovely and elegant their each wedding dresses were..

Indeed! laces gowns are ones you should consider as for your wedding ceremony. Because these dresses are pretty exquisite and elegant to missed, just look up the picture on top you’ll gonna see from their on how lovely it was, right? also, you can move freely by wearing it alone unlike the other gowns out there that is made to make you feel stiff and dull as you’re having a hard time pulling it off.

And you might also want to check this lace wedding dresses Australia – newly designs from aussie and I know you’ll gonna like it as these were a very light gowns to wear and at the same time the price ranges are quite affordable unlike with the other brands or shop where they tend to make their gowns looks fancy and elite but turns out they just uses some low quality materials that wont for sure last for a good year. Go get these dresses now and see for yourself on how lovely they are!